This project focuses on the renewal of the Chinese vinaya (jielü fuxing 戒律復興) in China and Taiwan throughout the twentieth century, a phenomenon that we analyse in its specific historical and social background and in a long-term diachronic perspective. The contemporary resurgence of Chinese Buddhism includes a recovery of ancient traditions and practices, some of which had been disregarded or had disappeared for decades – sometimes even for centuries. This process is especially evident with vinaya. The rebuilding of Buddhist monasteries in the People’s Republic of China and the renewal of Buddhism in Taiwan since the early 1980s have been accompanied by a generalized reinstatement of monastic discipline.

In China, there is a real will to revitalize monastic discipline and, more specifically, to restore correct ordination procedures and rules by looking back at the past. Vinaya revival is also being carried on in Taiwan, both inside vinaya monasteries and in modern monastic environments such as Foguangshan and Fagushan. For instance, in a video now available on the Chinese video-sharing website Tudou, the renowned vinaya master Guoqing 果清 (1947-) clarifies that Buddhism will remain rootless and will have no chance to recover if a revitalization of monastic discipline is not implemented. The case of Guoqing, the abbot of Taiwan’s Yuantongsi, who is often invited to China, also clearly shows that the two contemporary vinaya revivals are far from being unrelated.
The closest model for the contemporary movements, both in China and in Taiwan, is the vinaya master Hongyi 弘一 (1880-1942). In effect, a similar phenomenon has already occurred during the first half of the twentieth century, when many leading representatives of the Buddhist clergy devoted themselves to the reinstatement of Chinese monastic discipline in their own monasteries and/or for the Buddhist community as a whole. They could do that by composing new codes of monastic rules, restorating correct ordination procedures, and propagating traditional Chinese vinaya texts. 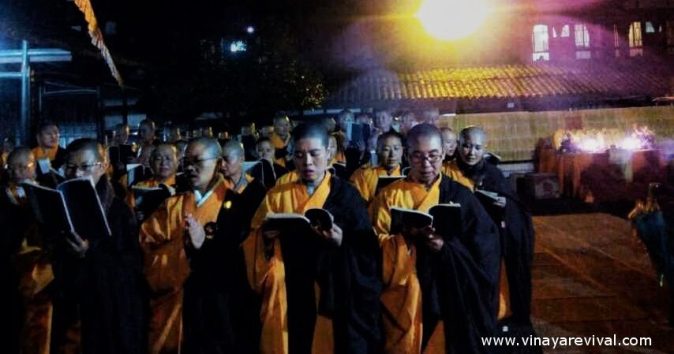 The promoters of vinaya revival in the twentieth and twenty-first centuries could also refer to some very authoritative ‘forerunners’. Hongyi himself explicitly drew on Daoxuan 道宣 (596-667), the renowned early Tang master who is traditionally regarded as the founder of the Nanshan 南山 vinaya lineage. Daoxuan believed that ‘precepts are the foundation of the practice of all sages and the live root of the three learnings’ (戒為眾聖之行本，又是三法之命根). Both Hongyi and Daoxuan “lived in periods when Buddhism in China was thought to be in decline, and they were regarded by later generations as reviving Buddhism through their learning and practice of Buddhist monastic discipline” (Huaiyu Chen, The Revival of Buddhist Monasticism in Medieval China, New York 2007). Similarly, a jielü fuxing also took place at the end of the Ming period: Guxin Ruxin 古心如馨 (1541-1615), whose endeavour is considered to be the source of the modern Chinese vinaya tradition, and his disciple Hanyue Fazang 漢月法藏 (1573-1635), are credited with being late imperial China’s revivers of monastic discipline. At this time, a regeneration of the monastic community was seen as essential to cope with an alleged decline of Buddhism (Jiang Wu, Enlightenment in Dispute. The Reinvention of Chan Buddhism in Seventeenth Century China, Oxford 2008).

Nevertheless, the vinaya revival throughout the twentieth century is not a mere return to the past. To put it with William M. Bodiford, “vinaya uses the authority of (apparent) conformity to established tradition to promote innovation and adaptation” (William M. Bodiford, Going Forth: Visions of Buddhist Vinaya, Honolulu 2005). This research project aims to verify whether in reaffirming conventional models and standards from the past, the advocates of monastic discipline also adapt the Buddhist tradition to the contemporary situation and determine its rejuvenation. In this connection, the vinaya revival that took place in Republican China, and those occurring nowadays in China and Taiwan share the same fundamental meanings and objectives, though displaying specific features that reflect unique social and political conditions.
More precisely, our project is addressing the following questions:
• What is the meaning of vinaya revivals of the first and second half of the twentieth century?
• What are their respective functions and objectives?
• What are the differences and continuities between them?
• What relations do these phenomena have with previous similar phenomena in China’s past history? And how do they differ?
• What is their impact on the so-called “Buddhist revivals” of the twentieth century and on Buddhist modernism in general?
Topics such as Buddhist modernism and revivals as well as Chinese monastic discipline have already attracted the attention of a growing number of scholars of different backgrounds, however, the relation between Chinese monastic discipline and Buddhist revivals has never been explored so far.
By addressing meanings and effects of monastic revivalism in modern and contemporary China and Taiwan, our project aims to shed light on the reactions of Buddhist leaders and communities to the challenges of modernity.